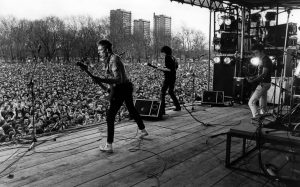 The Clash playing at Rock Against Racism

“Rank And File Antiracism: Historicizing Punk And Rock Against Racism” by Stuart Schrader explores the history of Rock Against Racism, an anti-racist music festival started in London in 1976 to add a cultural component to the fight against racism and fascism across England.

Excerpts from the article:

Rock Against Racism, founded in London in 1976, was an effort to reorient pop music toward a substantive commitment to antiracism, which included concerts, fanzines, records, and mass protest, as well as support for self-defense against street violence by the Far Right. Rock Against Racism demanded that music, particularly punk and reggae, not be escapes from the everyday, the street, and politics, but be deeply informed by and answerable to these domains. Rock Against Racism attempted to make explicit the implicit promise of agency and social transformation that punk rock’s inchoate subcultural rebellion promised.

These upstarts were trying to prove that punk aesthetics and antiracist political organizing might cohere. To them, popular culture mattered, it was vibrant, and it was politically up for grabs. Practically, according to Syd Shelton, a member of the organizing committee and RAR’s most prolific photographer, “The SWP did supply troops on the ground: people to put out leaflets; put up posters; sell badges and our fanzine.” As a result of these efforts, circulation of Temporary Hoarding peaked
at over twelve thousand copies, and more than one hundred thousand people attended each of the two London “carnivals” RAR organized in 1978. Thompson’s fellow social historian Raphael Samuel described the first RAR carnival as “the most working-class demonstration I have been on” and a unique enough event “to have sensibly changed the climate of public opinion.”

All pictures by Syd Shelton. More of Stuart Schrader’s writings can be found at his website.